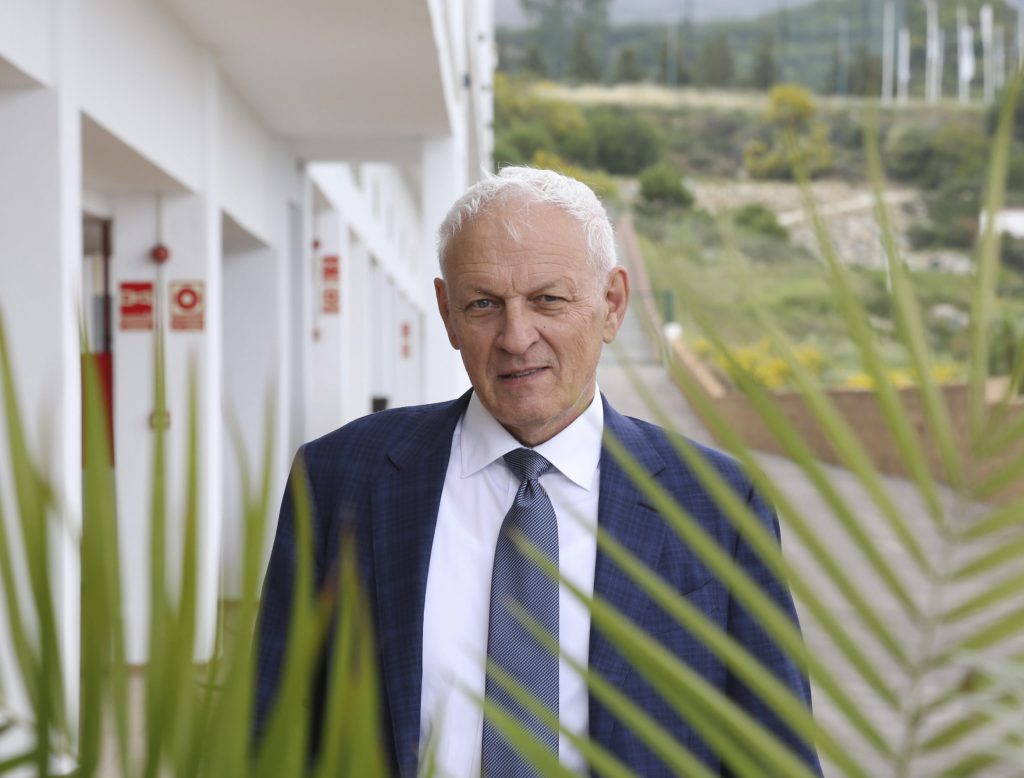 THE NEW UNITED NATIONS
FOR A FREE HUMANITY

After 2000 years, this is the New Modern Seat of the Holy Grail.
The sole Holder of the Highest Authority for the entire Humanity.
Endowed with the highest divine powers.

As a young Swiss Student, 1972, inspired from the ‘Club of Rome’
about the future, since then fully dedicated to humanity’s future.

Today, after 48 years of research, study, and explorations
about politics, economy, education, psychology, religions,
and the potentials of human’s inner development,
the crucial point of no return is collectively given:

A complete global reconstruction of humanity
with well nurturing the 22 mental functions for fulfilment.
Or the human made Armageddon will bring darkness.

What is most striking about meeting Dr. Edward Schellhammer beyond his pleasant and polite manner; youthful disposition or passionate and sincere views on humanity and the planet, is his unshakable conviction that the world needs a new pioneering education.

But exactly who is Dr. Edward Schellhammer? Is he a Philosopher, an expert on Human Matters, a Psychologist, a prolific author of over 30 titles from psychology to politics and economics, an educator, or a visionary with a profound and beneficial insight into the human condition?

The answer is that he is all that and more. In different age he would have been called a polymath, and probably kept close company with those giants of The Age of Enlightenment, like his fellow countryman Jean Jacques Rousseau, Thomas Payne and perhaps even Thomas Jefferson.

For, it is exactly this gift of enlightenment that Dr. Schellhammer wants to give humanity.

He reveals: “My studies, global travels, professional experiences and extensive study and research since 1970 have given me a clear and unique insight into humanity, human evolution, spirituality, education, cultures, needs, values, standards and our purpose in life like no other!”

Pausing to add: “Humanity hasn’t even begun to discover what the true path of human life on earth is fundamentally good and right for”.

Born and educated in Switzerland he has lived in Paris, South of France, London, Kiel, Detroit, and Mexico, before settling in Marbella, Spain, some 27 years ago.

He studied Education, Psychology, Psychoanalysis, and Philosophy. He was a lecturer at the University of Zurich as well as other institutions, and as a member of international workshops he dedicated his ample energy to futurology, future perspectives of humanity, peace and disarmament, development of education in Latin America and key global issues in general, concentrating on developing a new understanding of politics and economics for the future. His findings are indispensable for all those who value life, love, and justice.

He places great emphasis on Dream Theory a subject that he has researched for most of his life and passionately believes in, declaring that some 35 years ago he had a dream that told him to solve the mystery of man and human evolution. Stating categorically: “My initial reaction was, this is an impossible task!” and then quickly adds with equal conviction: “But today, I think, no, I know, that I have discovered all the fundamental components that explain the mystery of man and human evolution.”

With his professional background he has written many books spanning: Individuation (holistic personal development), Dream Theory and Interpretation, Problem Solving, The Individual and Collective Unconscious, Love and Relationships, The Archetypes of Man, The Future of Humanity, Global Human Education, New Philosophical Anthropology, Didactics in Teaching and Counseling and Coaching.

All inner processes – psychical, spiritual and practical – to find and live the (archetypal) codes of human evolution are well documented like never before in the history of mankind. Everything that you need to learn is elaborated in his books.

Dr. Edward Schellhammer has unveiled the mystery of mankind, the psychological-spiritual and archetypal codes of human evolution. It has taken 35 years to understand humans, the divine and factual human evolution, the mendacious aims of politics, economy, public education, religion, spirituality, and the state of humanity and the world, in order to offer you today the eternally valid concept (codes) of the Archetypal Human Evolution.

During the last 35 years he had around 14,000 dreams about the state and development of humanity, the world and the planet. Countless dreams have shown him everything of fundamental relevance for humanity’s future and evolution.

During the same period he also had estimated 3,000 dreams about the genuine archetypal evolution of mankind, the state and potentials of the mind and of the world population, the ‘other world’ and God. He has been in his dreams in the ‘other world’, in the divine paradise, and he has experienced the ‘Union with God’ as well as many more archetypal processes. He profoundly elaborated all this; estimated 80,000 hours of explorations and analysis in total.

Dr. Edward Schellhammer says: “The never before achieved most advanced psychological, spiritual, archetypal, educational and practical concept, the Philosophical Anthropology of the Archetypal Human Evolution, is prepared and can lead humanity to hope, peace, justice, balance, truthfulness, and fulfillment.”

Like the man himself his books are not for the faint hearted with challenging, pioneering and vanguard content and new ways of thinking that covers shaping of the mind, personal development, human values, human evolution, life, business, politics, economy, society, education, and religion – for everybody that is searching for the truth and for a fundamental personal fulfillment. Reading his books is pure adventure for the mind.

After decades of extensive explorations, research, analysis, writing and sometimes personal retreat, Dr. Edward Schellhammer is now at the disposal of discerning individuals and institutions wishing to pursue prepared and tailor-made programs of evolutionary further education.