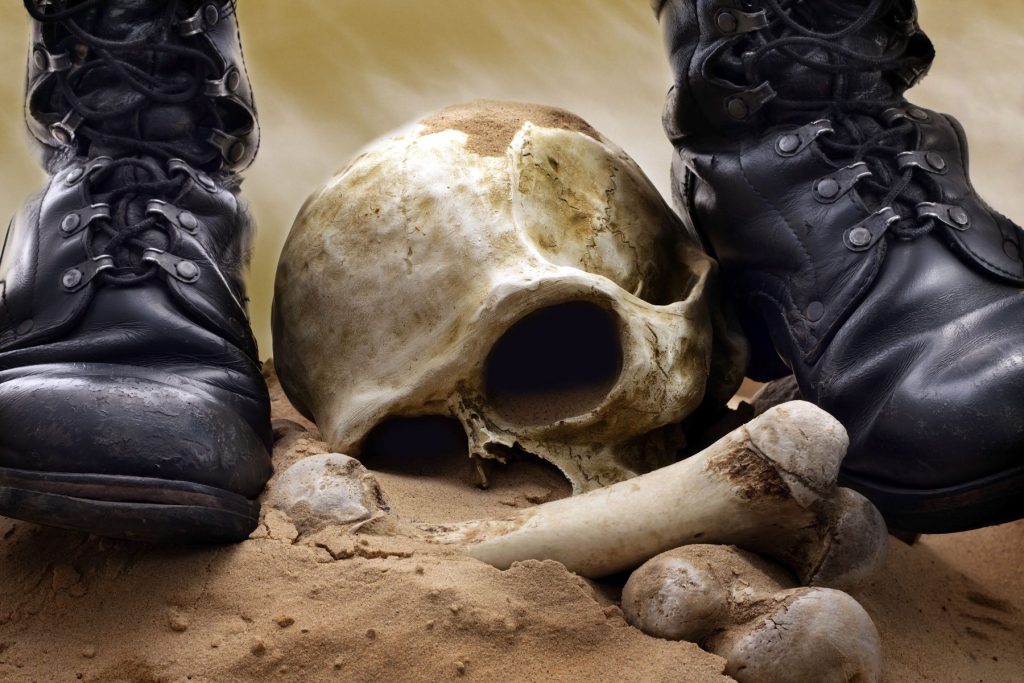 The history of 3000 to 7000 years up until today is nothing but an endless, gruesome murder perpetrated by elites and rulers. Such crimes were already known to the kings, emperors, princes, rulers, dictators, Caesars, and elites as well as those in power in religion.

Hundreds of millions of babies, children, women, adolescents, men and older people have been killed on battlefields. Bloodthirsty slaughter is everything that moved in these brain functions – even the last decades and still today.

“Never again war”, the collective soul implored. But endless horrendous wars ensued: governments overthrown, entire nations destroyed, 4-5 million people murdered, entire countries and their resources taken over, virtually overnight (in the name of God and for the elect). Sick in spirit are these warmongers and politicians; a band of robbers, de facto mass murderers and almost all are of “Western descent” – up until today.

The most abominable atrocities have always been committed by kings, emperors, rulers and the elites; in the West and elsewhere. The religions also had their fingers involved. And that’s how it is still today.

The people of every continent have suffered infinitely among these criminals. A lust for blood, murder, suffering and destruction! Why? What for? The right answers, facts and reasons, must be identified and put in books of history. The story must be written completely new. So that people learn for their future. We know the European mass murderers since the 12th century; they all have raged badly in Europe, Africa, Latin America, America, Asia and the Middle East to this day. They all committed genocide in the name of God and J.C.

Everywhere, Europeans (and Americans, but mostly of European origin) have enslaved whole peoples, murdering them, destroying their cultures, seizing their land and stealing all resources and everything that was (and is today) not nailed down – in the name of God and Jesus or Abraham. Certain people have always wanted to dominate the entire world, determine everything, control everything, exploit everything. The German-French War (1870-72) was the initiation for the ‘object’: Russia – only a repetition. Governments were trapped until they blindly landed in World War I; in the end Germany was subjugated.

From 1933, the entire German elite and leading power fell into the most devilish traps that ever existed in history. The goal was to dominate Europe and Russia; as in 1870. At the end Germany again subjugated – until today 2019. Who cares? Singing “Halleluiah” has become a remedy to distort the past collective doing.

From 1945 onwards, this continued with wars (led by the US and NATO) – North Korea, Vietnam, Asia, Afghanistan, Palestine, the founding of Israel (theft), the Middle East, the Balkans, etc., as well as massive rearmament, wars, destruction of whole states and international communities (with war or sanctions), economic power and concentration of capital. The game has not reached its peak: Russia is the old and new destination. And China?

Who forced Truman to drop a nuclear bomb on Hiroshima and Nagasaki without reason? Which evil mind ordered that? Nothing in the spiritual universe is more vicious than the people who ordered this “execution.” It was later joined by Americans and the NATO states, who committed the worst atrocities to date and continue to do so today.

Governance: People must suffer, struggle, have endless problems, distrust each other, be exploited, be abused for wars, be brainwashed, manipulated, cheated, ignored, suppressed, enslaved, mentally limited or stunted, disoriented by increasing multiculturalism, without a genuine ‘Self’, fully controlled and guided by the big corporations today.